The artist was born and died in Nowy Targ (1917 - 1984). He finished school and worked as a hairdresser. In 1940, he was deported to forced labor in Germany. There he was sent to a camp, where he was beaten and tortured. In 1943 he was found at the train station in Kraków. Later, his sister from Nowy Targ took him in. He lost his memory, he was mentally disabled. He couldn't work, he lived in his own world of memories and nightmares. He began carving in limestone and wood. The sculptures presented figures that appeared in his imagination and memory, possibly referring to traumatic experiences. He created exclusively for himself, plasticizing his personal experiences and obsessions. 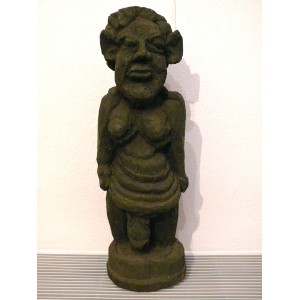