One of the most important Polish painters of the second half of the 20th century. He was born on the 7th of January 1923 in Kraków, died on the 21st of February 2011 in Kraków. In 1940 he began his studies at the Kunstgewerbeschule in Kraków. In 1942, he spent less than a year in St. John the Baptist's Lavra near Lwów. There he studied the art of painting and the history of icons. After returning to Kraków in 1943, he made new contacts with the circle of the future Kraków Group. After the war, he continued his studies at the Academy of Fine Arts in Kraków under Prof. Eugeniusz Eibisch (1945-1947). At the First Exhibition of Modern Art in Krakow in 1948/49 he presented paintings in style of geometrical abstraction. He did not exhibit during the socialist realism period. At that time he dealed with stage design and painting of orthodox and catholic churches . In 1955 he presented in Łódź his first individual exhibition. In 1956 he took part in the XXVIII Biennale in Venice. In the years 1957-1962 he was a teacher at the State Higher School of Fine Arts in Łódź, then at the Academy of Fine Arts in Kraków, where he taught at the Faculty of Painting until his retirement in 1993. In the second half of the 1950s he achieved a characteristic style of nudes, landscapes and figural scenes in interiors, which he owed to his fascination with icons and experiences with sacred painting. In 1976 he resumed monumental projects, creating wall paintings, Way of the Cross and stained-glass projects in the Church of Divine Providence in Wesoła near Warszawa (1976-1979). The artist was widely recognized as an authority in the field of art rooted in spiritual values. 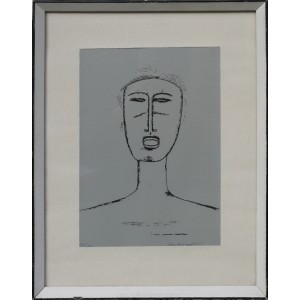