Studnicki Juliusz (1906-1978) - a painter with great artistic and teaching achievements, creator of surrealistic compositions, surprising with a riot of colors and shapes of fantastic creatures. He was born in Kniazyce and died in Warsaw. Studies at the Academy of Fine Arts in Krakow in 1924-29, with J. Mehoffer, W. Weiss, K. Frycz and F. S. Kowarski. Stay with the Kapists in Paris. Co-founder of the Pryzmat group, formed by the students of Felicjan Szczęsny Kowarski, with which he exhibited until 1937. During the war he was imprisoned in Oświęcim. After the war, at the Academy of Fine Arts in Gdańsk. In 1953 he was awarded the Knight's Cross of the Order of Polonia Restituta. After 1959, professor at the Academy of Fine Arts in Warsaw. He practiced easel painting, wall painting and drawing. In the pre-war period he was a leading Polish colorist, and after the war an outstanding representative of the Sopot school. He painted landscapes, still lifes, and portraits. In the 1960s, he created a series of oil paintings, gouaches and watercolors, different from his previous works, depicting the grotesque world of fantastic creatures. From 1963 he lectured at the Academy of Fine Arts in Warsaw. He is buried at the Powązki Military Cemetery in Warsaw. 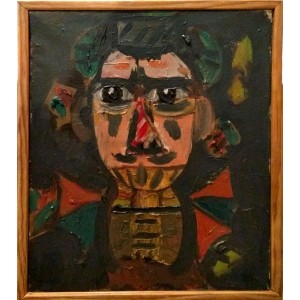