He was born in 1928, died in 2014. He graduated from the Academy of Fine Arts in Warszawa in 1953. He studied with J. Cybis,  and at that time developed his interest in Colorism. From 1965 he ran a painting studio. Until the end of the 1950s, he created woodcuts. In the mid-1950s he began to paint abstract paintings, similar to informel. Until the 1970s he painted expressively and spontaneously. His later paintings have a clearer, "controlled" form . Nature, its colours and the richness of its forms was a constant inspiration for the artists. In the following years, in addition to painting, he weaved tapestries and also worked in ceramics. In 1956 he represented Poland at the Venice Biennale. Tadeusz Dominik is one of the most original figure in contemporary Polish painting and an outstanding colourist; his works can be found, among others, in the collections of the National Museum in Warszawa and Kraków. 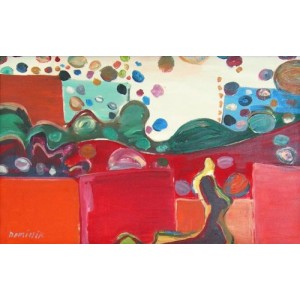