She was born in 1929, died in 2007. She studied painting and wall techniques at the Academy of Fine Arts in Poznań in the studio of W. Taranczewski. In 1971-73 she lectured at the State Higher School of Fine Arts in Łódź, then at the Academy of Fine Arts in Warszawa. In 1955 her works were exhibited in Paris: Salon de Mai (1963-66), at the Youth Biennale and at the Charpentier Gallery at the exhibition "Ecole de Paris" (1963), where she became an honorary member of "Nouvelle Ecole de Paris" and the group "Réalités Nouvelles". She also exhibited in Italy in the exhibition "La Nouva Figurazione" at Strozzi Square (Florence, 1963). Her works can be found in museums and private collections in Poland and abroad. 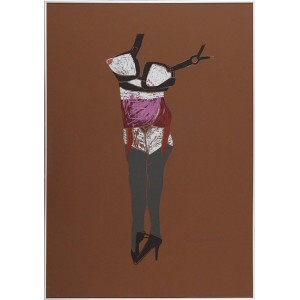