He was born in 1927 in Niewodna, Wiśniowa municipality, Podkarpackie voivodship, died on 30 December 2012 in Kraków. One of the most outstanding artists in contemporary Polish painting. Graduate of the Academy of Fine Arts in Krakow. "Creator - storyteller". Winner of the Witold Wojtkiewicz Prize (2000), awarded by the Krakow district of ZPAP, and the Prize of the Minister of Culture and National Heritage in the field of visual arts (2007). He dealt with easel and wall painting as well as drawing. Inspired by the provincial Baroque painting and folk art, he created his own style. He used naive forms and simple means of expression, yet his works are full of emotions. They relate to the things that fascinated the artist: birth, love, evanescence, death. Religious themes are an important motif in Mucha's work. His polychromies can be found, among others, in churches in Niewodna, Lutcza, Łętownia, Rzeszow-Staromieście, Lubliniec Stary, Zapałowo, Potok Jaworski, Oleszyce, at the Catholic University of Lublin.  "A painting must be created as if you were to die tommorow". - Eugeniusz Mucha. 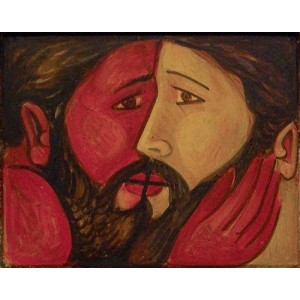 The kiss of Judas