She was born in 1970 in Wrocław. In 1991/92 she received a scholarship and went on to study at The College of St. Catherine w ST. Paul (USA). She studied at the Academy of Fine Arts in Wrocław in the lithography studio of Prof. Basaj and Prof. Frąckiewicz. She received her diploma in easel painting in 1998 from Prof. Konrad Jarodzki's studio. She has had over 20 individual exhibitions (including London, Wrocław, Warszawa, Toruń, Częstochowa).  In 2007, she received a scholarship from the Ministry of Culture and National Heritage. In 2012, she received a scholarship from the Lower Silesian Voivodship Local Government. In 2014, the individual exhibition "Direct Painting" was held. (City Gallery, New York, London, Berlin, Paris, Tokyo, Wrocław). In 2016 she took part in the collective exhibition "Afforadable Art Fair". (Amsterdam). She carries out actions in the urban space ("Old BANANANA"), in which she finds an outlet for her social involvement. 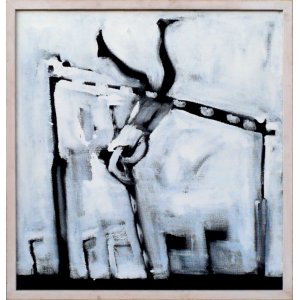