He was born in 1961. From the end of the 1980s he has shown his works at individual and group exhibitions, first abroad (Germany, France) and then in Poland. In 1991 he became a member of ZPAP. After his individual debut in Poland (exhibition in BWA, Częstochowa 1994), his works were included in the travelling exhibition "Polish Surrealists", which cruised around Poland in the years 1995-97. He represents the popular trend of the so-called magical realism. He builds his compositions usually in zones, placing in the characters in fantastic, colourful costumes. 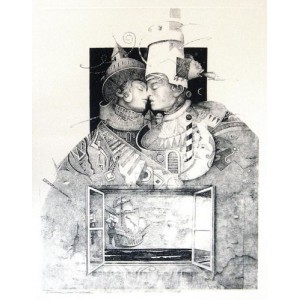