She was born in 1928 in Warszawa. She is a daughter of a famous polish poet Jan Brzechwa. She studied at the Faculty of Painting of the Academy of Fine Arts in Warszawa under Prof. Eugeniusz Eibisch, and in 1955 she received a diploma. She deals with oil painting, drawing and illustration. Her art is narrative and tells the story of loneliness, fear, joy, friendship and love. Her world of art is poetic, close to the that of children's imagination and, at the same time, to that of grotesque. Her paintings evoke associations with children's theatres from the canvases of Tadeusz Makowski. In 1955 she became a member of the Association of Polish Artists and Designers. She created her own style of depicting human figures - grotesque and decorative.  She portrays characters in theatrical poses, which she intertwines with idyllic scenery. 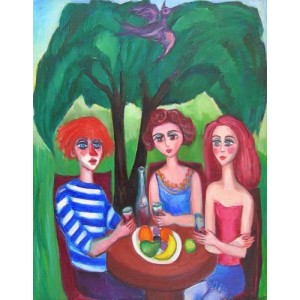 Encounter under the tree 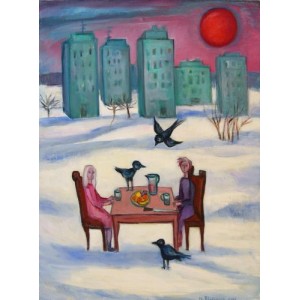