Edward Lutczyn (born in 1947) - Polish visual artist with a characteristic line. Known for his satirical drawings, caricatures, illustrations and posters, both for children and adults. In 1955 he was awarded in a drawing competition organized by "Płomyczek". He made his debut in 1971 with illustrations in "Szpilki". He collaborated with many magazines, such as "Gazeta Wyborcza", "Playboy", "Przekrój", "Reader's Digest", "Świerszczyk", "Wiedza i Życie". He also drew in the TV show "Butik". Author of two comic books published in the Relax cartoons magazine, in the early 1980s. He also deals with designing posters, postcards, album covers. He illustrated over 130 books, his works have been exhibited many times in Poland and abroad. Multiple winner of golden, silver and bronze "Szpilka". In 2016, the laureate of "ŻyRafka" for illustrations to fairy tales for children. 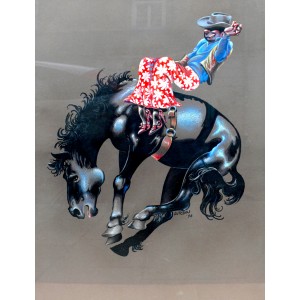