He was born in 1959 in Śląsk Cieszyński. He began his artistic studies at the Academy of Fine Arts in Katowice, and later moved to the Academy of Fine Arts in Krakow. He graduated in 1984. He was inspired by Jan Matejko, Marcel Duchamp and Jerzy Duda-Gracz. He is a co-founder of Tercet Nadęty. Together with the group, in the 1980s he published a magazine about art "Bengal" and published provocative artistic manifestos. Together with Tercet, he was a pioneer in the use of advertising as a means of promoting artistic creativity, e.g. in Radio "Trójka". In 1984 he was awarded the Grand Prix of the National Exhibition of Young Visual Arts "Arsenał 88". At the end of the 1980s the artist left for Germany, where he intensively created and exhibited his works. He lives in Belgium and Poland. He deals with easel, plafond and fresco painting. A representative of the "existential neorealism" trend. 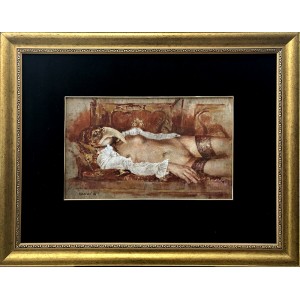