She was born on 20 June 1930 in Falenty near Warszawa. She studied at the Academy of Fine Arts in Warszawa and at the Academy of Fine Arts in Sopot. She worked in the studios of Marek Włodarski and Eleonora Plutyńska. Immediately after her studies she created monumental gouaches, full of wild colours, fantastic plants and creatures. However, she quickly moved away from painting. She focused on fabric and tried to give it a three-dimensional character. Since the mid-1960s she had been creating huge works made with traditional weaving technique of dyed sisal, which had fully spatial features: both sculptural and architectural at the same time. They revolutionized the look at the artistic fabric - she completely broke with the flatness of the fabrics intended for interior decoration. They were called "abakans" after the artist's name. The international position of Abakanowicz was bolstered by her works from the 70s from the series "Alterations". (including series such as, amongst others, "Heads", "Back", "Sitting figures") and "Embryology". - evolving from hollowed out headless human torsos and silhouettes to organic forms resembling eggs. They exist somwhere between traditional sculpture and fabric - made of hemp ropes and canvas made of jute; saturated and hardened with synthetic resin. "Embryology" received general acclaim at the Venice Biennale in 1980. In the 1980s, the artist began to work in traditional sculptural materials such as bronze, stone and wood. Just as in the case of textiles, she clearly marked their properties, including their organic character, for example in the series "War Games", where she used trunks and branches of old trees cut down by road builders. 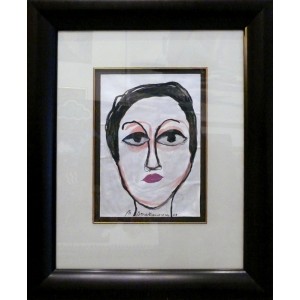