Painter, drawer, author of spatial installations and actions in interiors and landscapes.He was born on June 8, 1942 in Łomża. He graduated from the Fine Arts High School in Warszawa and in 1962 he began his studies at the Faculty of Painting of the Academy of Fine Arts in Warszawa. He was a student of Prof. Juliusz Studnicki and Prof. Jan Cybis, in whose studio he prepared his diploma (in 1968). Winner of the Minister of Art and Culture Award for promoting visual art (1970), Kościuszko Foundation scholarship in New York (1972). In 1970 he received a gold medal and an award at the Złote Grono symposium in Zielona Góra, and in 1978, he received Art Critics Cyprian Norwid Award for the best exhibition of the year. In 1994 he received the Jan Cybis Prize for lifetime achievement. In 1967, together with Jerzy Zielinski, he organized the Neo-Neo-Neo exhibition at the Medical Club in Warsaw. Only four colors appeared in his paintings: red, green, blue and yellow. The artist used op-art methods to evoke optical illusions (whirling, wavering, apparent movement of forms). In these works, which used flexible, wavy lines, the influence of Art Nouveau was perceived. Simultaneously with his paintings, he also created forms made of plates and foil to be mounted in space. The introduction of martial law brought a significant change in the mood and meaning of his works. Monochromatic, dark canvases were then marked by faint, flaccid lines of drawing. The most frequent motifs were patriotic and religious symbols, added with titles referring to the realities of time. Another radical change took place around 1990. A huge, joyful picture exploding with the richness of colours, shapes and movement became a symbolic harbinger of a new period. 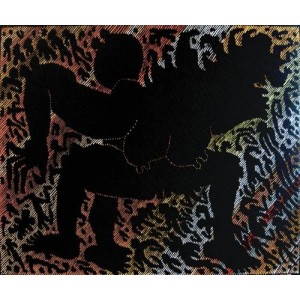