He was born in Gniezno on 5th of january 1914, died in Warszawa on February 24, 2015. From 1930 he studied at the National School of Decorative Arts and Artistic Industry in Poznań. In 1936, he received a certificate of approval at the Faculty of Decorative Painting and Stained Glass Industry. In 1937 he took up painting studies at the Academy of Fine Arts in Warszawa under Felicjan Kowarski and Leonard Pękalski (he received his diploma under the direction of Kowarski in 1947). He spent the years of the occupation in Warszawa, continuing his artistic work (at that time he performed, among others, exlibris). He cooperated with the Information Department of the Government Delegation for Poland. From 1940 he was associated with a group of graduates of the Academy of Fine Arts in Warszawa, active during the occupation in the so-called Bacciarellówka in the Royal Castle, and after the war known as the "Warsaw group". In Musiałowicz's art, especially immediately after the war, appeared strong themes related to martyrdom- the tragedy of the Warsaw Uprising, the demolition of the Warszawa. He commemorated the ruins of the city in a series of drawings from 1945-1946. Looking for a form suitable for his war experiences, he found it in the art of the Dutch, especially Rembrandt, with whose work he became acquainted with during his journey in 1956. Since then, his painting has been permanently dominated by dark colours, a calm, sometimes hieratic composition of forms that merely suggest human figures, rich texture and glossy surfaces. Over time, the artist began to construct spatial forms made of wood, as usual covered with a rich layer of paint, in elongated standing shapes. Until 1983, Musiałowicz was active in ZPAP. He was a member of international artistic organisations, including several Italian ones, such as the Accademia Tibertina in Rome (from 1965), Accademia Italiana delle Arti e del Lavoro in Parma (from 1979), Accademia Europea, Calvatone (from 1985). In 2002, the National Museum in Poznań organised a major retrospective of his work. 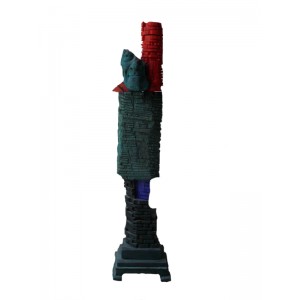 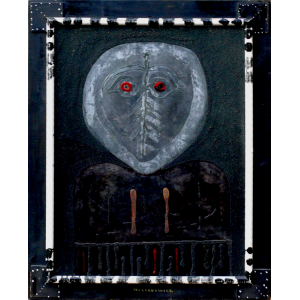 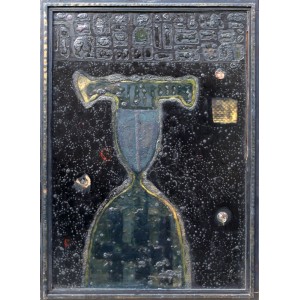 From the cycle 'Reminiscences'