Painter, drawer, illustrator and designer of applied arts. He studied at the Academy of Fine Arts in Warszawa in Wojciech Kossak's studio, where he was admitted at the age of 15 as the youngest student. In the interwar period he studied in Paris and Rome. He worked in oil technique, gouache and drawing. The first exhibition of his works took place at the Warszawa Zachęta Gallery in 1927. After the Second World War the artist dealt mainly with applied graphics and book illustrations, returning to painting only in the 1960s, under the influence of the view of Hungarian steppes during his travels. From then on, horses became the dominant motif in his work. The painter is particularly valued for his natural lightness in presenting their movement and the lively colours of his works. Korolkiewicz's works are all the more valuable as almost all his pre-war paintings burned down during the Warsaw Uprising. Korolkiewicz was not only a painter, but also a talented opera soloist: he sang baritone parts in Warsaw Opera. 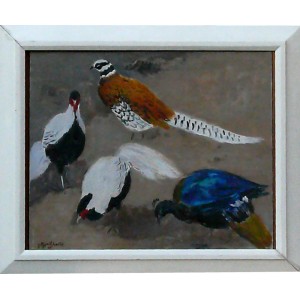