He was born in 1955 in Warszawa. He studied at the Academy of Fine Arts in Warszawa - in 1980 he received his diploma in painting from Prof. Stefan Gierowski's studio. He was a co-founder of artists' association Gruppa, with which he exhibited in 1983-92. During this period, the artist's paintings commented important events in Poland. He is considered to be one of the main figures of " The Expression of the 80s" trend. In 1986-89 he created figural paintings in which the form (colour, modelling, perspective) fallows the principles of realism. However, the characheristic of the figure, in particular the situations in which the artist placed them, was permeated them with galling  strangeness. The artist achieved this effect by, for example, duplicating figures (Fotograf / Photographer. Photographer, 1986), depicting figures in situations of uncertainty, discomfort or threat of falling (Trudności w poruszaniu / Difficulties in Moving, 1987), and manipulations of space (Romanica Toscana / Romanica Toscana, 1987). Sometimes the surreal atmosphere resulted directly from the theme or presented existential situation. In his own opinion, the artist considers the 1990s to be a much more important period in his career than his earlier achievements. In the 1990s, together with Marek Sobczyk, he ran a private School of Art in Warszawa. In 1997, the painting technique used by Jarosław Modzelewski changed from oil to tempera. The artist's intention was to revitalize the canvases by means of tempera technique, which allowed him to shape the texture of the canvas more freely. The specific atmosphere of Modzelewski's paintings and the cinematic way of framing the theme caused critics to compare him to Edward Hopper. 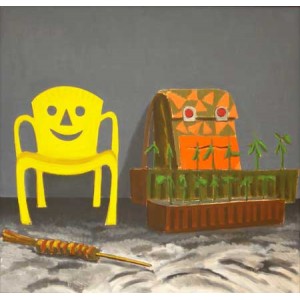 Still life with the palm