He was born on 26 August 1930 in Siółek (Sobiesko, Ukraine) - Polish sculptor, educator. On 10 February 1940 he was deported with his parents and siblings to the Ural Mountains, where he lost his mother, father and three younger siblings. He returned to Poland in 1946. In the years 1948-1952 he attended the Secondary School of Fine Arts in Zakopane. After graduation he continued his studies at the Faculty of Sculpture of the Academy of Fine Arts in Warsaw in the studios of Ludwika Nitschowa and Marian Wnuk. In 1955, while still a student, he participated in the exhibition "Against War, Against Fascism" at the Warszawas' Arsenał. He received his diploma with distinction in 1958. From 1958 to 1966, he was an assistant in Ludwika Nitschowa's studio. In 1964 he joined the "Reconnaissance" group and participated in its exhibitions for many years. In 1988 he was appointed associate professor of the Faculty of Sculpture, and in the years 1971-1978 and 1985-1987 he held the position of prorector of the Faculty. He received the title of full professor in 1995 and retired in 2000. He cultivates monumental sculpture, ceramic sculpture and ceramics. 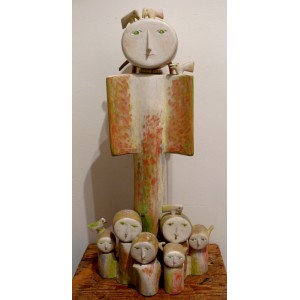