He was born in 1918 in Lwów, died in 1987 in Rome. He studied at the Academy of Fine Arts in Kraków. During the occupation he continued his education at the Kunstgewerbeschule, eventually finishing his studies in 1945 at the Academy of Fine Arts in Kraków. During the second world war he worked closely with T. Kantor's underground theatre. Until 1948, he cooperated with the Young Artists Group. In the years 1950-55 he did not participate in the official artistic life, at that time he was involved in the painting of church polychromies and conservation. In 1954 he moved to Zakopane, where he lived until the end of his life. In Zakopane he took up a teaching job at the Kenara School, where he worked until 1969. In 1959, in Paris, he joined the international "Phases" movement. From 1962 to 1979, he was a teacher at the State Higher School of Fine Arts in Poznań, and from 1977 a professor. In 1979-81 he was a professor at the Academy of Fine Arts in Kraków. Initially, he created figurative painting, but abandoned it in favour of informel. His work, similar to abstraction, contains elements of the grotesque that comment and interpret the reality. The artist's mastery of colours brought a great decorative effect to his works. In the last years of his life he returned to figurative art. The artist's art represented Poland twice at the Biennale in Sao Paulo (1959 and 1975) and in Venice in 1962. His grand posthumous exhibition was presented in 1997-98 at the National Museum in Warszawa, and then in Zakopane, Wrocław and Kraków. 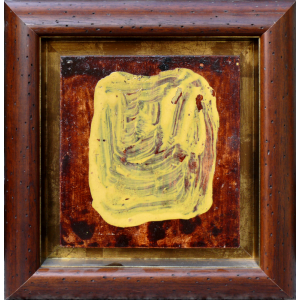